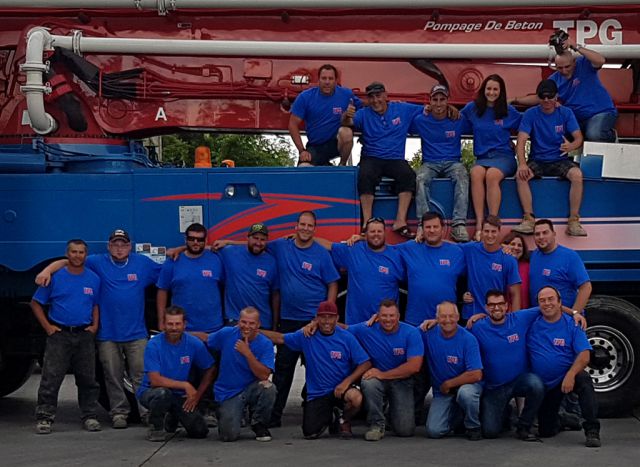 Being a concrete finisher during the 60’s and 70’s, Aldo Tiramani and his partners decide to create a concrete pumping company in 1974 to supply the concrete pumping needs of concrete finishers and form workers. From the start, the priorities were excellence in service and punctuality on job sites. In 1981, the current president of the company, Michel Tiramani, joined the company to continue the family tradition.

TPG Concrete pumping benefited from the infrastructure boom of the 1970’s by focusing its energy on developing key relationships with local contractors, which led the company to obtain many super projects over the years such as:

During the 1990’s, TPG Concrete Pumping begins to do its first placing boom on tower projects with the CGI Tower in Montreal’s downtown core. During this period, Lydia Tiramani, who is today Vice-President, joins the company. Lydia oversees the company’s accounting and administration department. During the late 90’s and 2000’, TPG undertakes a massive fleet overhaul to ensure a top of the line service to its clientele. This process has since been repeated many times and the TPG brand is today synonymous with recent and quality machinery. Due to this competitive advantage, TPG was awarded many contracts requiring top-performing machinery such as the Molson Center, the Laval metro extension, the L’Acadie interchanger, the extension of the North American terminal at Pierre-Elliott Trudeau Airport, the A25 bridge, and thousands upon thousands of residential and commercial foundations and floors.

Today a third generation of family leadership is present in the company with David Mirabella, assisted by a team of directors and coordinators, Pierre Bertrand and Guy Pouliot. The vision today is to provide not only a high quality piece of equipment on job sites but to ensure that the right piece of equipment, with the right accessories, installed in the right place, at the right time provides a flawless and seamless concrete pumping service for the total needs of the construction industry.

The operator team at TPG Concrete Pumping is the distinctive force of the company. We have kept the best operators in the business year after year and attracted the top young talent to learn from them. We have many operators with over 25 years of experience who transfer their wealth of knowledge over to the younger operators, this is how TPG concrete pumping maintains such a high level of service year after year.

Our management team is a team that sincerely holds your projects goals and objectives at heart. Our team of managers oversee your projects in a way that ensures the maximal effectiveness and safety of your job site.